"I don't know what effect these men will have on the enemy but by god they terrify me" is a quote attributed to the Duke of Wellington describing his own men.
This comes to mind when I think of the horde who pile out of the Wonky bus onto unsuspecting European streets in search of a Stranglers gig. Very much, I suspect, the same as those monks on Lindisfarne in 792 when suddenly confronted by the first Viking raid. 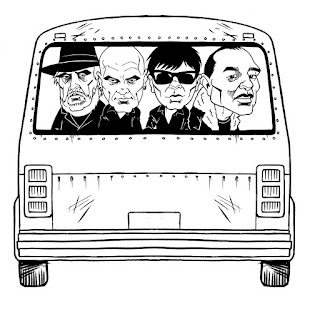 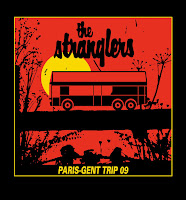 They add a vibe which can never be equalled by the good burghers of the Netherlands or Belgium who I have witnessed from the relative safety of the stage observing the Wonkies with a mix of trepidation and disbelief.

I applaud these modern day berserkers who give a lift to our concerts in Europe. Long may you Wonky(a new verb).
JJ Burnel/9th December 2015
Bus illustration-Steve Beaumont
Posted by ratter at 4:03 PM