I have an idea that this might just prove to be the oldest Ratter of them all. To date for sure, but possibly the future too.

It's not just the senescence of the author - which is sadly beyond doubt - that forms the qualifying factor here, but the subject matter, which can be traced back to an incident in 449 AD.

In June of that year, Hengist and his brother Hersa with fellow mercenaries, departed from Jutland and crossed the North Sea in their longships to set foot on the shores of Kent at Ebbsfleet (near Ramsgate) and established the first Anglo-Saxon kingdom and what most historians consider the beginning of English history.

So what, I hear you say, has all this got to do with The Stranglers?

Many of you will already know part of this tale because it was touched upon within the pages of Dr David Buckley's book 'No Mercy'. I am of course referring to the Viking ship 'Hugin' which appears on the cover/sleeve of the 'Raven' album. 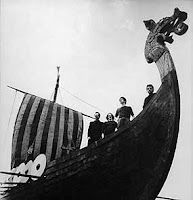 In 1949, a re-staging of the 'invasion', with a newly constructed exact replica of Hengist's ship, was organised to commemorate the 1500th anniversary of that historic landing.

The occasion was considered by the authorities at the time, to be of sufficient educational and historical importance to warrant the mass attendance of every school within a certain distance of the site chosen for the re-enactment, Broadstairs, in Kent.

Now, it so happens that some 18 months of my formative years were spent at a school in Broadstairs. I had been sent there for health reasons. At the time, I was a chronic Asthmatic, and medical opinion in the 40's held that a 'fresh air' environment was the most suitable locale for children with the condition, and so I was sent to the Holy Cross school which stood on top of the cliffs overlooking Broadstairs, and within view of the French coast on a clear day.

This also meant that on the allotted day, I was bussed into the town and onto the beach along with thousands of other school kids. I was within a few feet of the 'Hugin' as it swept onto the shore line and the fearsome looking (at the time) Vikings came ashore.

Of course, this may be of little interest to some of you, maybe none to others, but what makes it slightly more interesting nonetheless, is news - discovered by our percussionist pal, Neil Sparkes (a near resident) - that someone has found the actual footage of the event and posted it on You Tube!

There are two links here. One takes you to footage of the arrival on shore of the 'Hugin' on 29th June 1949, and the other covers the dedication ceremony, attended by HH Prince Georg of Denmark, at a later date (at which I was not present) when the great ship was erected on concrete pillars at Pegwell Bay near Ramsgate, where it still stands today. It can be viewed free of charge at the roadside off Pegwell Bay.

Readers following this story, who may have wondered how the 'Hugin' came to be on the 'Raven' album, will now know. As for why, that relates to the original concept behind the album and the title track. Inspired by the Norse sagas, 'The Raven' recounts the Viking quest with their inseparable longships. They are said to have taken ravens on board their longships to go ahead and seek out land. Quite how they might have conveyed that information to their masters, I can't imagine.

As I said in my interview with Dr David Buckley, I had no idea in June 1949, that one day I would stand inside this ship and that it would feature on the cover of a Rock 'n' Roll album.

How could I, Rock 'n' Roll hadn't been invented!

The dedication ceremony, attended by HH Prince Georg of Denmark
Posted by ratter at 11:19 AM 11 comments:

These blogs will be a regular feature of the new look site and I’ve been asked by the team to write the 1st one…an honour indeed!

Well, here we are again at the start of what hopefully will be another good year for us all…the March tour is shaping up nicely and we’re looking forward to getting out and seeing you lot again, my favourite part of the machine…

The Greek dates were great and it was nice to see some Brits taking the trouble to travel…always amazes me to see the effort put in to see us abroad and it’s always appreciated…there was an earthquake while we were there too…5.2 on the Richter…enough to make the earth move…would like to say we caused it but apparently the plates moved somewhere out under the Aegean Sea…

We’re in rehearsals for the tour at the moment too, so as always expect the unexpected…the black jukebox is being dusted down as we speak…

I’m off to see my beloved Sunderland play tonight so I thought I’d write this today before I get too suicidal to do it in the week…!