A little bit of magic, a whole lotta noise

Not a huge tour, for sure, but a very different one. I've not seen anything like it since the heady days of the late seventies. Yes, I was there! It's as though our boys have stepped back into history by a factor of some three decades or more. The energy coming off that stage each night was breathtaking to behold. And yet the band are regularly criticized for being over the hill. Don't you believe a word of it.

I was asked if I could put a few words together if I was able to find anything 'special' or different on this one. Well, for one thing, there were a lot of young new faces. I can't help but feeling this is not entirely unrelated to the growing multitude of 'clone' pretty boy bands and their like, that aren't really bands at all but manufactured, coached and packaged products created by corporate interests possessed of mass production skills as opposed to uniquely talented individuals. But that's the world we now live in. Give me the old wrinklies any day, old enough to know what the hell they're doing.

Mike Marlin was a breath of fresh air. Here was a new face delivering something new and interesting. Then the irrepressible Wilko Johnson with Norman Watt Roy and Dylan Howe, what a powerhouse! And the MIB, what a package!! Wow!!!

As for special or different, well, there was that special moment on the last night in Manchester when a rather well known duo of bass and guitar talents bared ALL in their, end-of-tour prank, before the highly amused Mancunian audience. Well, I don't think I will have to go into too much detail about that one as I'm sure it will soon, or more probably already has, appeared all over the internet by now! 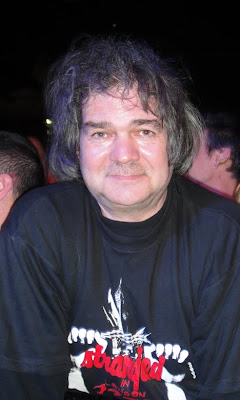 But the one 'special' I have chosen, is someone known to thousands of you. Not in all probability, his face or his name, but the sheer sound of him. He is known to all the band and crew as 'Big Voice'. He is, Dave 'Big Voice' Horton. He hails from Tenby and by day he's a mild mannered Estate Manager. By night, he slips into a telephone booth and transforms himself into the persona of the man we have all grown to love and cherish. He is a veteran of over 50-60 gigs, 4 of which were on this most recent outing. Big Voice is well known to you by his trademark sounding...........

Big Voice, can be heard back in the dressing rooms as clear as if he was in the room himself. The minute he is heard, everyone says, "HE'S HERE". In fact, band sound boss Nick Astro said, "if he gets any louder, we are going to have to tape up all the windows to stop them shattering"! Asked if he had any thoughts about Big Voice, Jet said, "I think his gift is wasted, someone, maybe NATO, should sign him up and ship him off to somewhere like Tripoli, where he could be used to scare the shit out of that nasty man with the silly hats!"

Photo credit Ava Rave
Posted by ratter at 12:48 AM 2 comments: