Once Upon A Time In The West Country...

I look out from my window at the rain,relentless and unforgiving. The very low clouds seem to have the magical property of shielding me from the sun which I know is out there because this summer of 2010 we have been blessed with it. I get a deep sense of autumnal melancholy. Was it only three weeks ago that we were bemoaning the fact that the grass was not the colour that it should be, A and E departments were complaining about the number of adults being admitted for barbecue and cooking oil burns to uncovered bodies and this was the year that Glastonbury came really good? It already seems a lifetime away. As I wish my memories of Wyefest were. 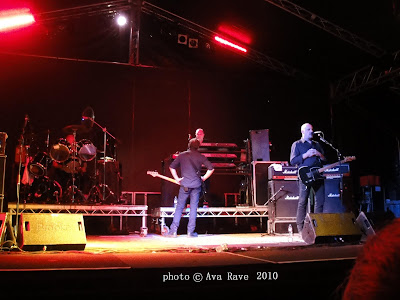 It all started out so well. We would fly into Heathrow from Poland and then be flown by helicopter to somewhere near Hereford on the Welsh borders where we would play in a field on a scorching July evening. However, due to some skullduggery involving local farmers and town councils and licences being revoked, it was put off and rescheduled for late August.

As a band we hadn't played for a few weeks so we decided to rehearse in the west country on the day before we were due to play, a striking distance from the field in Herefordshire. It rained and it rained. And it rained some more. But ever the optimist I thought that tomorrow would be another day. It was. Another day of yet more rain. For a few hours, long enough for Dave, Baz and myself to walk around Hereford town centre on a Saturday afternoon playing "spot the SAS man" without getting wet, our hopes were raised sufficiently to believe that Mr Raincloud might hold off for a little while longer thereby confirming what many people already know that when the Stranglers are involved there are "powers" at work.

Apparently a limousine was going to take the band to the site. When it duly arrived we took one look at each other and insisted that Gary ,our tour manager, should take us himself in his motor. There are limousines and there are limousines. The Stranglers were not going on a hen night, nor were we attending our school "proms" as they are so-called these days. These vehicles are very silly. I thought they were silly in LA but around the English/Welsh countryside even sillier. This one was the longest I'd ever seen and even had the dot com address on the side.It was also white. There was lots of it.

Our crew had had to be towed by tractor earlier in the day when their truck got stuck in the mud. There was a lot of mud. Usually festivals have contingency plans for when there is rain 'cos in the UK it does occasionally rain in the summer. Metallic tracks help ease traffic over muddy fields where the majority of festivals seem to be held. Here there were none. 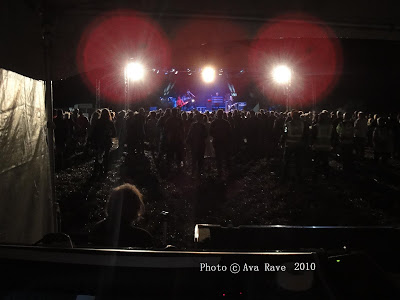 In fact there wasn't much of anything but there were a few very hardy people out in the field. I wouldn't say many but they were noisy. Normally the change over between bands takes about 30 minutes . Here due to the, erm, inexperienced local crew our Stranglers crew had to take command. We were due to go on at 10.30pm with a midnight curfew. We didn't get on till 10.55pm. Third number in Dave's Moog packed up. Since the show had been rescheduled our usual keyboards tech wasn't available and this sure was a baptism of fire for the new guy. Dave explained that we had to drop eight numbers. Well that wasn't going to be so much of a problem since time was running out anyway!

New keys tech somehow managed to supply Dave with a new keyboard after about five songs and just as we launched into "Grip" some guy jumped up over the barrier, slipped in the mud ,avoided the non-existent security and started jumping about on stage only to lose what appeared to be a front bridge containing a tooth or two, right beside me. Without breaking my rhythm I nudged the bridge with my DM towards the guy and saw him disappear off the side of the stage whilst inserting said apparatus back into his mouth.

I don't know why I found this funny but I did. Actually we thoroughly enjoyed ourselves because the whole thing was absurd. We also played well that night but not as long as we had hoped. I have never had so much mud on my clothes. Not even when I've mud wrestled with my clothes on. But that's another story.

To those who were there, and braved what were awful conditions and yet despite that knew how to have a good time, I salute you.

The Grip denture incident can be viewed here