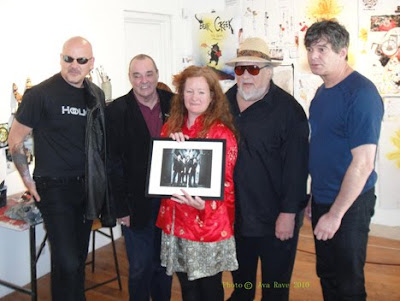 Well, what a varied weekend. We started on the Thursday at the Cheese & Grain in Somerset as a warm-up gig. It went well enough but we had a lot of problems with the sound on stage & (for us) it was hard going. After the show it was back to a local hotel to sleep. 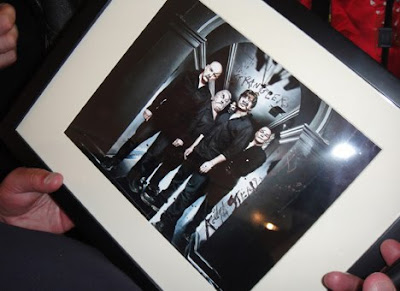 The next day we started fairly early, dropped off most of the cars at the farm & travelled down to Glastonbury. What a massive site. It took a while to get our initial passes & get to the backstage area, then longer to get our dressing room passes & meal tickets, then it was the normal wait in sweltering conditions. At least (for once) it wasn’t chucking it down. On to the stage. At least it wasn’t as hot up there. It seemed to be full up & the audience appeared to enjoy the show as much as we did. I saw at least one raven flag in the audience. At last we’ve played Glastonbury & I hope we’ll do it again pretty soon. What a great time. 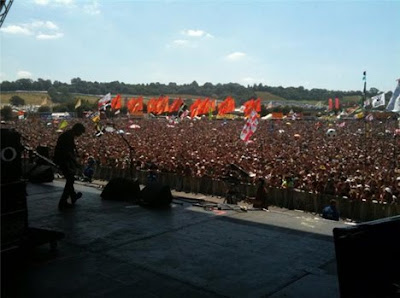 After we’d had some food & drink it was back to the farm to pick up the cars & then straight to Gatwick for a few drinks & a couple of hours kip.

The next morning I’m still trying to forget. We had to check in at about 4.00 am for our flight to Krakow, Poland. After the flight it was about 1½ hrs drive to Borek then some rest before a late show at the Easy Rider festival. We were on stage quite late & didn’t get back to the hotel ‘till the early hours on Sun.

Another early start in the morning to get back to Krakow then home. We got back at around 2.00pm & Baz & I drove up & played a charity gig in my village (both feeling pretty knackered).

As I said at the beginning, 4 totally different gigs, but what a weekend. I hope those of you who were at any of the shows enjoyed yourselves as much as we did. 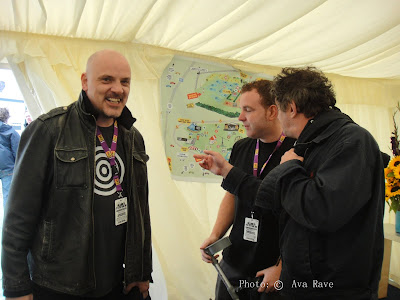 The whole thing started for me on June 21st when I did a radio interview for Glastonbury radio at 11am then drove the 325 miles to Somerset, arriving early evening. We rehearsed the sets for the up and coming gigs the next day and after the ubiquitous visit to Tuckers Grave I had an early night ready for a bit of messing about with a new effects board I have the next day.

Wednesday out of the way we then headed in to Frome for a soundcheck at the Cheese and Grain on Thursday afternoon, and to lend our support to a project involving legendary English satirical cartoonist Ralph Steadman. The idea behind it all is that he produces a piece of art and then selected people who see it compose a musical framework for it according to how it makes them feel…and we’re among the judges. He also ‘defaced’ a photo of us in his own inimitable style which was interesting, and after a bottle of the local cider we headed across to the venue which was literally next door.
It’s always bittersweet for me personally going back to Frome as I lived there for 4 years and have many memories of the place. As we approached the gig there were a few flying around my brain but they were soon wiped away as we started to soundcheck and get the feel of the place…The stage was rickety, the P.A.was too small and everything was so loud it was hard to distinguish practically anything. Generally when the crowd gets in the sound smoothes out with the effect of all the bodies in there, but this gig (sold out for months)proved to be very hard work and none of us were pleased with it to say the least…personally it’s probably the roughest show I’ve done since becoming a 4 piece again in 2006,but all the travelling fans were once again in great form and as always gave us great heart...and I guess it served it’s purpose in ironing out then wrinkles for what was to come… 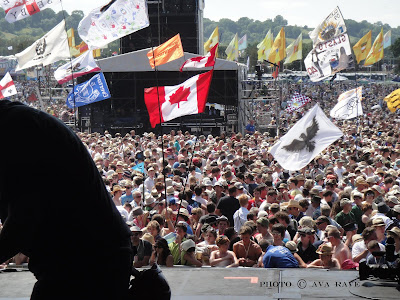 The next day was one of those days that you don’t want to end. As we approached the site at Glastonbury I was told it would be some spectacle and I wasn’t disappointed. As a ‘Glasters virgin’ it was something to behold, resembling a medium sized town with the biggest fence you’ve ever seen around it…and with flags flying, masts and thousands of tents it could have been a medieval siege. After the rigmarole of checking in (which involves a girl personally reaching into the car and placing a wristband on everybody present)and being directed to the correct area, we settled down to wait, literally not knowing what to expect. The weather was a perfect English summers day and we were told there were a few folk out front who’d turned out to see us…we weren’t expecting the roar of the 70,000 who were waiting when we walked out to the Waltz. After that everything was just a blur and before we knew it, our hour was up and we were leaving the stage, sweaty and very happy…I can’t recall too much about it apart from the fact that we all played really well, Jet particularly being on great form and seemingly the whole field joining in on the chorus of Always the Sun. We’d have loved to have hung around to soak up some of the post gig shenanigans and catch up with a couple of other bands but alas we had to leave to drive to Gatwick for a 6 o’clock flight the next morning to a gig in Krakow, Poland…up at 3.30…oh man that was a leveller.
Back from an ok show in Poland I have 1 day at home to get ready for the next jaunt.

This journey starts for me on Tuesday the 6th July as I fly down to Stansted in the evening for a Wednesday afternoon flight to Bratislava in Slovakia for a festival date on Thurs the 8th.

The Pohoda Festival is a relatively new gig and is attracting a lot of interest and bands year by year as it grows. The promoter for this gig has re-arranged everything a day early especially for us to play…he’s a big fan…

It’s in a beautiful part of Europe roughly an hour from Vienna and is an area I’m not familiar with, never having been here before. Around 6 o’clock JJ and myself go out for a stroll and find ourselves on top of a hill in a bar overlooking the town of Trencin, which is about 100km from Bratislava itself…and what a beautiful place it is…a huge castle surrounded by rolling hills and small mountains with steep cobbled streets .We have a light ale and take in the vista…beautiful.

We arrive at the gig around 10.30 being the headliners on this particular day, and are pleasantly surprised to find 10,000 kids in a field going absolutely nuts for a band many of them won’t have heard of, but they treat us very well and a great time is had by all…The stage is lovely and the sound and lighting systems are great…We hear that western music and many other cultural movements have only been allowed to this part of the old Czechoslovak Republic in the relatively recent past…around 10/15 years ago…no the wonder everyone’s enjoying themselves…
A funny aside to all this occurs when the band who are on before us, a local band who themselves have been around for 30 years, decide to play ‘Hanging Around’ in their set which features one Dave Greenfield on keyboards…Dave had gone down to the gig ahead of the rest of us and had been asked onstage to play…apparently the crew heard the song, recognised the keys, went down to the stage and there Dave was with a brandy and a shit eating grin…and they said it was weird to see him onstage with another band…I’ll bet it was…(You can watch the video here )

We get back to the hotel and retire early ready for the flight to Dublin the next morning which, of course, is an early flight…I’m amazed to see the amount of people who want to fly to Dublin from Bratislava at 9 o’clock on a Friday morning…the plane is packed but it’s a relatively short flight and we’re in the sanctuary of our hotel by noon UK time…After a siesta we have a few beers in the bar with the crew in the evening and head to bed.

The next day we’re opening proceedings on the main stage at Oxegen which is held at Punchestown Racecourse, about 45 mins drive from the city. The weather is not playing the game today and it’s pissing down as we arrive onsite. We played here 2 years ago and I start to remember the layout as we approach the dressing room/catering/artist area which is in the main grandstand building.
It truly is an awful day and as we wait behind the stage at 2 o’clock to start we literally do wonder if anyone will be there. We’re pleasantly surprised to find a good few hundred wet punters on the barrier, and as we start we can see hundreds more streaming across the fields like little columns of ants to see us…We end a pretty good set 45 minutes later in front of around 10,000 which makes us happy, and after a bite in the catering area (the food here is fantastic…it was the last time too) JJ and I do a radio interview with a guy who’s patiently waited for us to finish eating, and it turns out to be one of the highlights of the day…the guy is seriously funny and asks intelligent, humorous questions with little regard for radio etiquette, effing and blinding all over the place and taking the piss out of the powers that be who are all milling around watching and listening…he begs us to try to get back and play Ireland more often and we say we’ll try…top man…Then we drive to Dublin airport and get an early evening flight to Edinburgh ready for tomorrows’ appearance at T in the Park. 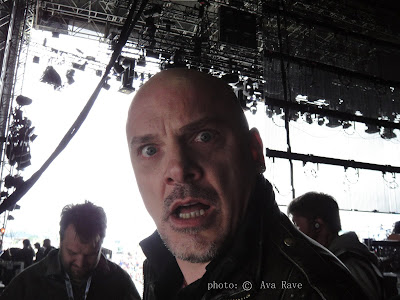 Jet’s joining us for this one, not having made the trips to Slovakia and Dublin, and he’s the first person I see as I step out the hotel in Edinburgh on Sunday morning…he’s looking fresh and well up for it and we head off to the site, which again is about 45 mins drive, in a convoy. Again the weather is dreadful and as we sit in our cabin we can hear the rain bouncing off the roof…here we go again.
In the next cabin are Skunk Anasie, and Mark the drummer is an old mate of mine from the days when he was with rock band Little Angels and I was still with Smalltown Heroes…I haven’t seen him for about 15 years so we shoot the breeze for a while and then it’s time to play…This time the crowd is much bigger from the off and we play to around 20,000 which, for a Sunday morning in the pissing rain, is quite an achievement…and the most surreal moment I can remember for as long time happens when we play Always the Sun…as if on cue, right at the 1st chorus, like someone switching a light on, with 20,000 punters singing with us…the clouds parted and the sun came out…and the roar from the crowd made all 4 of us grin like Cheshire cats…truly bizarre but amazing.

I thought about that a lot on my way home on the train back to Newcastle the next day…a fitting end to a couple of weeks of madness…as always thanks must go to our intrepid crew who made the impossible possible and Gary our TM who kept us all sane…thanks boys…see you all soon.