Black and White-track by track 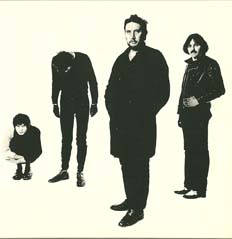 Thirty five years after the release of the band's third album Black and White, JJ revisits the album's tracks and associated b-sides:

Hugh's lyrics with my music I think. I can't remember much else about it. It's a hard one for Dave to play live, depending on where he is through his bottle of Cognac at the gig! The whole of the album was written (at Bear Shank Lodge) at Oundle and it was a very snowy winter. Everyone else went away for Christmas but I didn't cos I had nowhere to go. I was left at Oundle by myself.

Sleazy was written about our experiences with the Amsterdam Hells Angels in the autumn of '77. One of the Finchley Boys rode my Triumph over to Amsterdam and I went with the band. The Amsterdam Angels treated us very well, too well, and we ended up at their Chapter house, which had been donated by the Government to keep them out of town. After the Paradiso gig, I remember Jet going back to their club house on the back of a Harley. I went with the President of the Angels in his huge, American car and we got stopped by the Police. He gave me a large bag of white powder to look after while he got out of the car and went and pissed on the police car's front wheel! Back at their compound, we shot guns at a prison which was being built. Quite scary!

Outside Tokyo was completely Hugh, even the waltz music. Normally, all the waltzes were mine but I don't recall writing the music.

SWEDEN (ALL QUIET ON THE EASTERN FRONT)
Again, my music and Hugh's lyrics. We'd had a few set to's in Sweden by then with the Raggare (Swedish 50s influenced youth movement who drove old American cars) and had already been escorted out of the country under armed guard, for our own safety.

HEY! (RISE OF THE ROBOTS)
By then, we'd heard Devo and we really thought they were on to something musically. I remember talking to Lora Logic from X Ray Spex (who guested on sax on the track) and telling her to feel free to play whatever she wanted on it. We wanted that musical freedom that Devo had on this track.

TOILER ON THE SEA
I was left to my own devices over that Christmas and that's how Toiler came about. Toiler was one of my epicy instrumental things. I had the whole piece, all the parts of it and, as the others were away, I actually started rehearsing it with Dennis from the Finchleys on drums. I remember going into the rehearsal studio there and trying to get him to play the drums on it.


When Hugh got back after Christmas, he had a bit of a bad holiday. He'd gone with a Japanese girl to Morocco and he added his very recent story to my music when he came back after the break.

The lyrics are mine. We were going through a Cold War spell at the time and it was just me imagining how it would be if the Russians actually made it through to the West. There was a general fear that the Cold War was going to escalate into an invasion. We'd gone to Germany and realised that, at the time, Germany was completely inthralled with the Americans. They had lost their strength and had gone very pacifist. There are references to the 'American dream'. So, the song was imagining what would happen if it all kicked off...

Musically, we thought we'd be clever as we added one 5/4 bar into the song.

Threatened was another of my lyrics with Hugh's music. One night I went out with some people and they had opinions about everything, they were all too opinionated. I thought if it doesn't threaten you, what's the point in having a fucking opinion about something? Basically that was the idea behind the song. 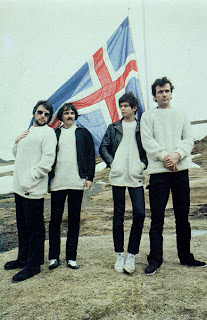 DO YOU WANNA?
My music and Hugh's lyrics and Dave's amazing vocals. I don't remember him explaining the meaning of the lyrics to me at the time. Definitely my riff though.

DEATH AND NIGHT AND BLOOD (YUKIO)
Death and Night and Blood was completely me, the title comes from a quote from Yukio Mishima. He was full of contradictions, he was homosexual but was married with kids, he was a highly rated writer but he wanted to make a statement with his body, which he did by becoming a body builder and taking up karate and kendo. He was also slightly misogynistic and leaning towards the fascistic.

He also had his own private army The Shield Society which enabled him to get access to a General's office at army headquarters and to incite the Japanese 'Self Defence Force' (as they weren't allowed to be called an 'army') into action. He barricaded himself in the office and then addressed the gathered troops but his speech was drowned out by the sound of helicopters and the soldiers jeering. He went back inside and commited suicide by Hari Kari.

At the time, (Julie) Burchill and (Tony) Parsons wrote a book called The Boy Looked At Johnny and in it they described me as a 'Nazi, homosexual thug'! That's unfair, I'm not a thug!!! They were part of the Socialist Workers and, in their minds, if you weren't with them, you're a fascist. That was typical of them really...

IN THE SHADOWS
In The Shadows started as a jam, which was originally twice as long as the finished version. It was a piece of improvisation went on for about 12 or 15 minutes! I spent about 12 hours with Martin Rushent in the studio editing it down. I also wanted to add a dub reggae type feel so there were delays and cutting in and out added on to it.

We actually improvised the lyrics which were about paranoia and fear. We wanted it to sound like Captain Beefheart which was why we sang in low voices. It was originally released as the b side of No More Heroes and was a taster for what was coming next. We felt it fitted the whole album concept of Black and White as it felt dark and 'late at night' so we included it on the album too. I liked it as it was something new, a real departure for us...

ENOUGH TIME
This was about the same paranoia, about how we felt about the times that we were living in, the zeitgeist. In fact, the whole of Black and White was quite paranoic. It was also fueled by the fact that we'd had all that success the year before, and we were now getting slated by the press. That fed into our general consciousness, it was us against the world!

The morse code solo at the end reads 'SOS. This is planet Earth. We are fucked. Please advise'. We thought we'd be clever and include morse code to send that message out...

We played it live on the tour at the time, but I'm not sure how managed to do it. We tried rehearsing it for the Weekendinblack convention in 2011 but we just couldn't get it together. It's one of the very few things that I don't know how we originally constructed it... 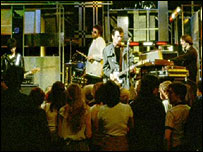 We didn't write it! Walk On By was a leftover from the days when we had to play cover versions. We'd play our own songs but, before people started throwing bottles, we throw something in that they knew! The solo section became a vehicle where we could extend our musicianship and it got longer and longer. Everyone played a solo in it and that became a trademark in some of our other songs in the future, like Genetix, where the four of us are playing totally different things. The instrumental section was a nod to Light My Fire by The Doors, that was the template that we used for the solo piece.

TITS
We used Tits as our weapon when something went wrong or against us! We'd circle the wagons and give people what they don't want. The song was taking the piss out of everything and it worked for us on occasion. We used it against the Finchleys when they tried intimidating us at the Torrington that first time. We weren't been forced off stage like they'd done with other bands. We also did it at the Roundhouse when we supported Patti Smith the first time. Old school sabotage...

MEAN TO ME
A basic bit of rock and roll because we were just a rock and roll band originally. We had no pretentions and it's an unpretentious rock and roll song with misogynistic lyrics from Hugh. We did a version with Celia Gollin. Dai Davies came up with the idea us working with Celia and to lend our kudos and musicianship to this girl he was trying to push. He wanted me to write songs with her, one of which featured Wilko (Johnson) too..

OLD CODGER
This was a blues type song which came about because we were pleasantly surprised having just met George Melly. We'd met him making an Arena programme for BBC2 where he had described us as the 'inheritors of Dadaism'. Hugh wrote the lyrics for him specifically for him to sing, with references to his self-confessed sexuality of previous years. During the recording at TW studios, with Lew Lewis (harmonica player), he also surprised us getting out a small tin and rolling spliffs! We didn't expect a bloke of his generation or ilk to be like that. It was all very chummy and we kept in touch with him for a few years...

SHUT UP
An inoffensive little song with my lyrics about a girl. We wanted to do the fastest song we could ever do. Punk by numbers, tongue in cheek and a bit throwaway really...

SOCIAL SECS (released as WASTING TIME)
The title is a play on words, with Hugh's lyrics about social secretaries at colleges who wouldn't book us. It also relates to the well documented Rock Goes To College incident which was considered commercial suicide at the time. The track went on to become Yellowcake UF6 although the riff also resurfaced on Do The European as I was working on Euroman Cometh at the time.