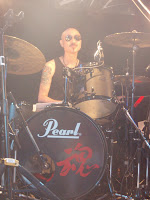 Keith was the drummer with ARB and he and JJ have been friends for many years. Keith was having his 60th birthday party gig in Tokyo at the Shinjuku Loft on 5th February and JJ made a commitment to play with him at the gig.

Keith told JJ that he wanted to play some Stranglers’ songs and JJ knew that there’d be no keyboard player in his Japanese band. Instead, there’d be 2 guitarists.

JJ met his band for the first time at their only rehearsal in Tokyo. Keith had had an operation on his right arm last year but he’s now back behind the drums and looking good. One of the guitarists, Shin-ichi Fujinuma, was familiar as JJ had met him once before. The other guitarist, Koya Naito, also played with ARB and, although JJ had toured with ARB in the past, it wasn’t with Koya so they had never met.

Before JJ got to Japan, the band had practiced six of the Stranglers’ tracks in exactly the same way they were recorded in the original albums. They seemed a bit nervous at the beginning but, as they started playing, the atmosphere soon became more relaxed with JJ speaking to them in Japanese. It wasn’t a problem for JJ to play those tracks, of course, but it must have been a lot of work for the others as all of them were going to play in other bands as well on the night of the gig. In fact, Keith was playing with all of the bands so he had 30 songs to practice!

The rehearsal lasted for three hours and they were ready, well almost. They only did a bit of backing vocals towards the end of the rehearsal so I was wondering what it would be like at the gig… On the day of the gig, they got together at the sound check at the Shinjuku Loft. It was just a short time and they were done. No worries.

The door of the Loft opened and it was jam packed with fans of Keith and various other artists and they were there to celebrate Keith’s Kanreki! I knew there’d be other Stranglers/JJ’s fans there not only from Tokyo area but also from other parts of Japan. 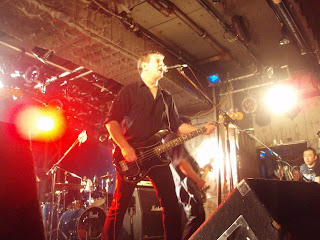 “Konbanwa.(Good evening)” With JJ’s greeting in Japanese, they opened the set. The band sounded great. You can actually hear the keyboard line played by the guitars! They seemed to be enjoying themselves too and you can see it on their faces. Before the last track, JJ started singing Happy Birthday and so did all others with the audience for Keith. Keith was smiling and raised his arm high to respond to all. It was a real bonus to hear JJ sing No More Heroes as it was the first time he’s ever taken the lead vocals on that! At the very end of NMH, JJ was looking at Keith smiling and putting his tongue out as if he was going to go on forever. Then JJ turned around back to the audience and shouted 1,2,3,4,1,2,3! in Japanese to end the song. A big applause and they all came to the front of the stage. Enjoy the video
After the gig JJ was met by Mr. Maeda, the director of the popular anime Gankutsuo, friends from Shidokan and fans who patiently waited.

Keith was very happy that JJ actually took the time out of his busy schedule for this special day for him. He said that he appreciated so much and was very touched by JJ’s friendship. JJ said that he just wanted to be there to celebrate his friend’s birthday. 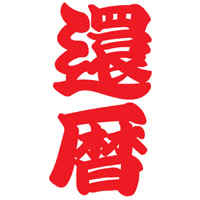 A person's 60th birthday is special in Japan. It’s called KANREKI. It’s the recognition of a person’s second infancy. The Japanese characters in the word KANREKI literally mean KAN = return (or cycle) and REKI = calendar. It is based on the traditional, originally the Chinese calendar which was organised on 60-year cycles. The cycle of life returns to its starting point in 60 years therefore KANREKI celebrates that point in a person’s life when his personal calendar has returned to the calendar sign under which he was born.

When celebrating KANREKI, people traditionally give red clothing as birthday presents. That is because in olden days, a new born baby was given red swaddling clothes as colour red was believed to ward off evil spirits.

Also, 60 years was a very long life in the olden days as the average life expectancy of a person was around 50. So it was to celebrate the long life although we have much longer life these days and 60 years is not considered old at all. Well, we know that well!

By the time he arrived in Japan, he had other appointments for Karate. Shidokan HQ recently opened a new gym/dojo in Tokyo where he visited one day. They then took him to a nearby shrine “Hiei Jinja”. Before walking up to the main shrine, you first clean your hands, left and right, then mouth. There was a kind of stage being built in front of the shrine and that was for Setsubun (3 Feb.) After visiting the shrine, they had a casual update meeting on Shidokan.

Setsubun （February 3 or 4）: the day before the beginning of spring according to the lunisolar calendar. On the evening of this day, people open the doors of their houses and drive the demons （i.e., bad luck） out of their homes and gardens by throwing handfuls of beans and shouting, "Demons out! Good luck in!"

There was another event for JJ which was Mr. Hisao Maki's memorial ceremony. Mr. Maki started Kyokushin Karate under Mas Ohyama’s instruction and later founded his own style. He was very diligent Karate master as well as a writer, and JJ had met him a few times in the past. 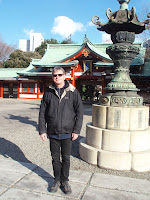 He suddenly passed away in early January and all shihans and masters of related Karate were to gather at the ceremony to say goodbye to Mr. Maki. There were JJ’s master Kancho Soeno and lots of Karate related people, his students, publishers, celebrities, and his fans. It was the first time for JJ to attend such a ceremony in Japan so unexpectedly he had a chance to experience another traditional aspect of Japan.

During his stay, he learnt another fact about Japan. It was a very cold day and he was sitting in a train when he felt his bottom was on fire… It was the train seat which was heated by the heater underneath. He also noticed that there were many Japanese people with blond hair. I told him that Japan is much more international so there are more blonde. He just grinned.