One of the most frequent questions I get asked by drummo’s, is how do you play ‘Genetix’? Without being behind a drum kit, it’s not very easy to explain. However, in an attempt to do just that, many years ago, I came up with the following piece. It was featured in an early edition of ‘Strangled’ magazine in 1982, an astonishing 29 years ago! God, how time flies.

Anyway, at that time, I had been asked to explain the drum track on ‘Genetix’. For those who are interested, here with notation, is the piece from that feature.

'It took me some considerable time to devise a drum pattern to accompany the technically strange ‘Genetix’. No conventional rhythm seemed appropriate, and after much trial and error, I eventually arrived at the arrangement you are questioning. As you will see from the following notation, there are three fundamentally distinctive patterns. The first revolves around the triplet. What makes the rhythm unusual, is not the rhythm per se, but more the way it is deployed around the drums. You may have experienced some difficulty in deciphering the rhythm from listening to the record, for it sounds simple and actually it is, but the comparatively rapid execution of the rhythm tends to conceal it’s chemistry. Pattern 1, calls for polished independent co-ordination. No two drums are ever played at any one moment. So, unless the technique of playing say, a triplet, or paradiddle or ruff, each note on different drums has been mastered, then the accurate execution of the 'Genetix’ rhythm will be impossible. Pattern 2, is a slight variation on pattern 1, and is simply triplets played on drums only. The final pattern, is an easily decipherable rock lilt of conventional nature with the occasional cymbal fill.

Here is the notation, and if you play it absurdly slow until it sinks in, you will soon get it sussed - and that goes for the other patterns too'. 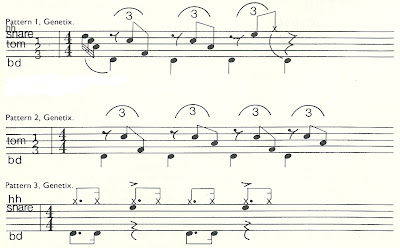