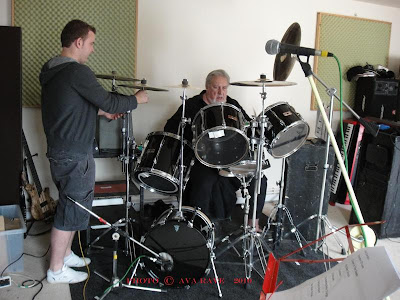 To continue with my nautical theme, if ever so slightly, a word about the Fowey outing, (the locals call it "Foy"). Although it is no more then a stone’s throw or two from the sea on one side, it is more famously perched on the banks of the river Fowey, as it begins meandering from what is actually the English Channel; but for a few score miles to the west where it becomes the full blown Atlantic; and then on northwards towards Bodmin Moor, petering out at the foot of Brown Willy, the famously desolate peak which itself forms one of the most prominent features of that mystical plateau. Almost exactly due east from it’s summit, you can see ‘Jamaica Inn’, of book and movie fame, on a clear day.

About thirty miles west of Fowey, on the Helford river, is Frenchman’s Creek, the location and title of another novel and movie.

Some three miles west of Fowey lies ‘Menabilly’, re-created in her novel ‘Rebecca’, as ‘Manderley’, (surely, far more romantic) this fine and ancient house was once the home of Daphne Du Maurier. In 1969, she moved a mile or so into another house named ‘Kilmarth’ where she spent the rest of her life and which characteristically she went on to immortalize in another novel, ‘The House on the Strand’.
This then, with all of it’s geographical detail, is clearly DDM territory. Drawing on early inspiration, DDM went on to create a host of characters and placed them in and around the surrounding countryside -she knew and loved - as she famously penned her way into international literary stardom.

No small wonder then, that this highly regarded festival of art and literature is so named. Mis-described by some, as both "highbrow" and "stuffy", it has surely now been wrested from it’s sometime reputation by the appearance of my colleagues and I. Not that this appearance should have been anything other than enlightening to a DDM Fest audience, but anyone reading this is probably only too well aware of our own vicissitudes. 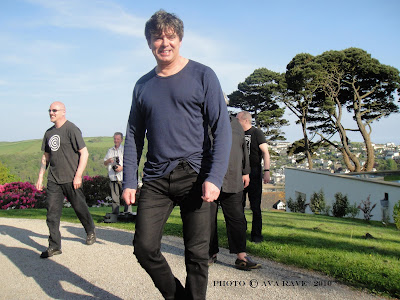 This was the one, NOT, to be missed. Not only the preserve of British art and culture at some of it’s very best, but at it’s location on that particular day, Friday 21st May 2010, it was at it’s Mediterranean-like finest. With an unusually warm if not, scorching hot day, the charm of one of England’s most delightful regions - at any time of the year - and the sub-tropical fauna which is able to survive in the area due to it’s un-British-like weather, it was for us, more akin to leisure than work.

Probably not the place however, for those who prefer the dark sudor of the pub or night club, or the more typical and often bland and even vulgar at times, British seaside resort. This was a well organized, attended, and interesting festival, distinguished from most by it’s uniqueness. The gig itself was as kick-ass as any you might expect from your MIB and it had the added feature of excellent acoustics within the "tent" erected for the occasion. Situated atop the western side of the Fowey gorge, views from the venue, with it’s vistas of the town, are truly awesome as are those - from a suitable vantage point - of the nearby ports of Polperro and Mevagissey to the near east and west, all steeped in the culture of the rich Cornish fishing tradition. 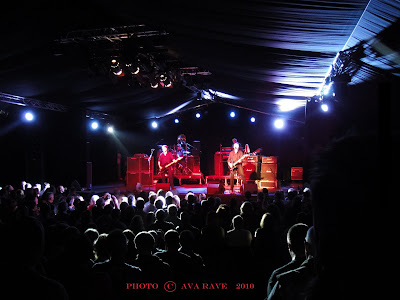 Yes, this was a great day out, the best in the west since the demise of the Cornish Colosseum, and a rare opportunity for the locals to get some Strangling in, but at least they can sleep at night secure in the knowledge that if they haven’t got us or you, most of the time, they do at least have Cornwall, or as Baz put it, Paradise!